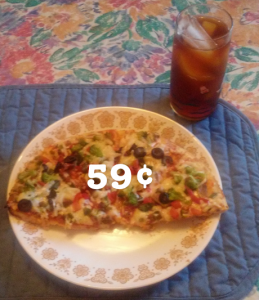 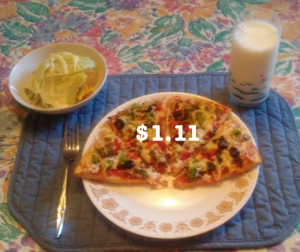 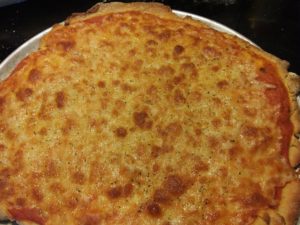 I once got a crazy deal on Tombstone pizza you will probably never see again, but deals happen on a regular basis, so you’ll probably get another deal like this on something else in your area. That’s how Smart Shopping works. Keep your eyes open and you’ll keep finding these rare deals without having to jump through hoops.

Kroger sells Tombstone for about $4. Kroger had a special, 2/$4. They also had a digital coupon, buy 2 Tombstone pizzas, get $2 off, so I got 2 pizzas for $2, or $1 each! If I had found a manufacturer’s coupon, I might have got the pizzas for free, but that’s taking advantage of a loophole in the system and is obnoxious.

Recently, I got two of Kroger’s fresh deli-made pizzas for $2.50 each (on manager’s special).

Because they know I like Tombstone, Kroger occasionally sends me a coupon for a free pizza to get me into the store.

Another nice, but repeating deal, is Publix soda. They regularly put their 99¢, 2-liter bottles of Publix soda on BOGO, so it’s 50¢ a bottle, giving me a drink for 9¢. Sometimes, they offer a $1 off soda if you buy three bottles, lowering the cost of a 2-liter bottle of soda to 17¢!

I think they might have figured out that brain fart, because I haven’t seen that deal for a while.